Isolation of Sinapic Acid from Habenaria intermedia D. Don: A New Chemical Marker for the Identification of Adulteration and Substitution


Background: Vriddhi is one of the Rasayana herbs in Ayurveda broadly used in vitality, strengthening Ayurvedic formulations. To fulfill steeply increased demand and declined supply, tubers have been collected in destructive manner resulting in reduced plant population and pushing the plant in Red list of IUCN endangered species. However, manufacturers are using substitutes and other substandard drugs leading to adulteration which puts the importance of therapeutically rich herbal plants at stake. Lack of chemical markers is the main inability of regulatory authorities for not taking any action against this adulteration.

Objective: Isolation of chemical marker of plant that can be used as a reference compound for identification of unauthorized substitution.

Methods: Preliminary phytochemical screening of methanolic and toluene extract of H. intermedia D. Don was done using standard methods followed by column chromatography for the isolation of phytoconstituents. A total of 3004 fractions were collected with Thin Layer Chromatography (TLC) profiling and different fractions were pooled. A single compound was isolated and confirmed by chemical test, melting point, spectral analysis and compared with the literature.

Results: Phytochemical screening of extracts shows the presence of alkaloids, carbohydrates, steroids, terpenoids, flavonoids, tannins and phenolics. A pure white crystalline powder was isolated by column chromatography which was characterized as 3,5-dimethoxy-4- hydroxycinnamic acid (Sinapic acid) with the help of IR and Mass spectroscopy.

Conclusion: This is the first report of Sinapic acid as a novel compound from Vriddhi, Habenaria genus and Orchidaceae family. It can be used as a marker for the identification of unauthorized substitution and adulteration claiming the use of Vriddhi. 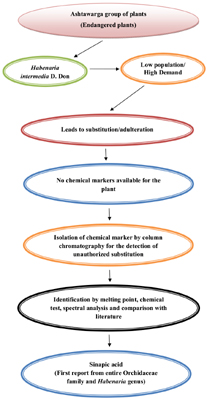